Want a little Dungeon in your World? 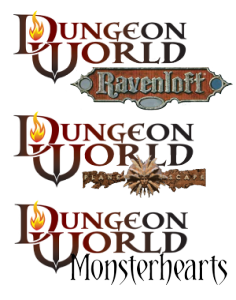 The Wolf does his best to stay out of dungeons. And chimneys, and any other small places where he might get cooked. Apparently though there is some made love for Dungeon World games happening all over the place. Check these out:

The Fifth Spear (AGOP) - Basetown sits at the feet of five towers that thrust into the sky beyond sight. Each tower is filled with its own wonders and perils but the fifth, the Blackspear, only opens it’s gates once a year for a single night. Will you be able to brave it’s terrors to regain immeasurable wealth? Or will it swallow you up for a year, releasing you only after it’s stolen your sanity?

Castle Ravenloft - Another lightning flash rips through the darkness, its thunder echoing through the castle’s towers. But Strahd is gone. Only the howling of the wind—or perhaps a lone wolf—fills the midnight air. The master of Ravenloft is having guests for dinner. And you are invited.

[ADVENTURE SITE] of the [OMINOUS ADVERSARY] - Glory and gold await in the dungeon, guarded by magic and monsters and worse. It will take a band of hard-hitting heroes to win it by spell and blade and guile. Together, we’ll assemble the team, discover their goals, and put them to the test as we improvise an old-school adventure module.

Dungeon Hearts - Youths face danger in the dark corners of the world, but the real dangers are the unspoken passions in their eyes and secrets buried in their hearts. When the thief uses her long nimble fingers to open that lock, what she’s really hoping to open is the heart of that cute but mysterious elf. When the barbarian charges headfirst into battle, will the bookish wizard even notice how those glistening muscles ripple in the torchlight? In a world where death lurks behind every corner, can there be any room for love?

Murder in the Lower Ward - Life is cheap in Sigil’s Lower Ward, but something more sinister lurks in the alleys of the planar City of Doors. Denizens wake to find a mutilated body on Baatezu’s Row. An angry mob gathers demanding action, and someone else will die if you don't intervene. Dungeon World and Planescape mashup!

Game registration for Big Bad Con 2014 opens 9/20 - Get your badge today!
Curious about 5th Edition? So is The Wolf!