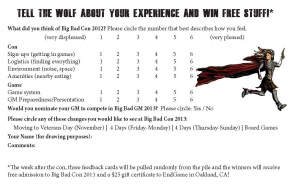 All the feedback forms have been tallied (all 429 of them) and I have some results. This is just raw data right now. How it ended up affecting Big Bad Con 2013 will be the subject of future posts!

On a scale of 1 (very dissatisfied) to 6 (very satisfied) rate your con experience:

Logistics (finding everything at the con): 5.5

Here are the average results for our GMs

Desired changes in the con (by percentage):