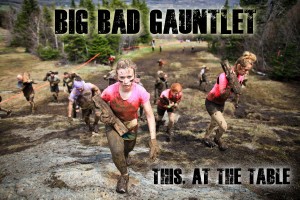 This year, in place of the previous Big Bad GM competition, we are debuting a new event -- The Big Bad Gauntlet. BBG is a new co-op game structure that pits both the players and the GMs against a single adversary.

Instead of the GMs running separate games in competition against one another for a single winning title as BBGM has done, Big Bad Gauntlet creates a larger framework that includes all of the GMs and their players at the tables, and sets the GMs up to lead their games in the same world in parallel, or possibly even covertly collaboratively, with one another.

The challenges and opposition will be present in the form of the judges (Agents) and the director (the Adversary), who are all in role within the fairy tale world of the Gauntlet as well as acting as meta-level arbiters and influencers with power over the GMs and players.

The power structure is intentionally uneven to heighten intensity and raise the stakes for the GMs, who will be challenged to both respond to the in-game wants and needs of their players as well as the obstacles imposed by the Adversary. Each table will represent a faction of fairy tale creatures who have become isolated from each other and can only communicate to other tables (factions) though the agents of the Adversary.

The Gauntlet will be run with modified Fate mechanics, simplified to prioritize and encourage collaborative storytelling and narrative negotiation.

One more unique detail about BBG will be audience participation. Audience members will be invited to engage with the players, GMs, judges, and director. The audience will be able to use their power as active witnesses to try to sway the decisions of the judges and director, but will have to decide individually which side they are on.

Have you got what it takes to make it through the Big Bad Gauntlet? Here are the links to sign up.

Big Bad Gauntlet - GM/Leader Sign ups (does not count against sign up quota, and is open now!)

Interested in playtesting Big Bad Gauntlet in the east bay before the con? Give us your deets!