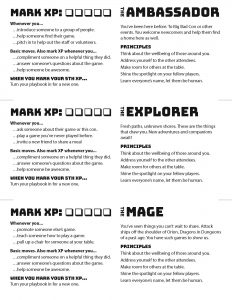 Big Bad World is a meta-game that we created for Big Bad Con 2016. To play, attendees select from the basic playbooks (Ambassador, Explorer, Mage, Rogue, Alchemist, or Tracker) and slide the playbooks behind their badge. On the front of the playbooks are our principles of play:

On the back are each playbooks moves which are all in the format of:

Mark XP when you... ...introduce someone to a group of people. ...play a game you’ve never played before. ...pull up a chair for someone at your table.

After the players have marked their fifth XP, they can turn in their playbook, get a shiny pin showing the playbook was completed, and get a new playbook! Once all basic playbooks are completed, our attendees can move onto the Advanced Playbooks, Wolf and Little Red. 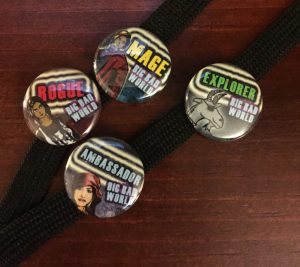 If you're interested in running Big Bad World at your convention:

The goal is to gamify a way to promote the behaviors we want to see at the con. Something that won’t feel like a list of “Thou shalt…” and instead feel like a fun way to invite, encourage, and for some people permit good behavior (i.e. someone might be too shy to introduce themselves to a stranger, but of the game tells you that you get XP for doing it, they may feel more comfortable trying it).

Variations other cons have made