I had a fantastic time; it was just about everything I would have wanted from a convention.

Sean Nittner lays down the gauntlet for the other local cons. A good time was had by all.

Congratulations again on what appeared to me to be a very successful Con! See you at the next one.

Best RPG con in the state, hands down (I've been to a couple in LA). I even say it gives Gen Con a run for it's money. As I told Sean, the attention to detail for the con was apparent and helped make it enjoyable. All in all, I'm going to be making this a regular event for me for as long as Sean can put up with running it.

I had volunteered to run my 3:16 game in the Sunday Morning slot. This was my game of the weekend I think, as I had some brilliant players. The great lines were coming thicker and faster than I could tweet!

It's been a blast so far. Thanks for organizing such an awesome con.

What an excellent con, maybe the best I've been too. I have no beef with boardgamers, etc. but the intimate, roleplayers only feel of this con really went a long way. Again, great con, looking forward to the next one!

You did a great job, Sean. Already counting down the days until next year!

Thanks again for a kick ass weekend. I seriously had like the best time ever. Already can't wait for next year! That was one of the best weekends I've had in a long time.

I had such a fantastic time at Big Bad Con! Everything ran really smoothly, and you could tell Sean had thought out every detail ahead of time. For a newbie to the gaming world, it was the perfect introduction to new systems and games; everyone was really welcoming. I'm already looking forward to next year! Thanks again for SUCH a fun weekend, Sean. I think I'm just now starting to recover I had a blast -- everyone was so nice!! Thanks for letting us newbies crash the party!

Thanks for putting on a great convention

This was the first year for Big Bad Con which was but a dream for somebody in the con circuit called Sean N. It turned out to be well organized for its first year and it's a viable contender against the bigger cons. All my games at BBC were good experiences or better.

I'm not on the "shuffler is an abomination against God and of the Devil" bandwagon, and I was being ironic about that in that conversation. BBC convinced me that "First Come, First Served" signups are workable, which I was skeptical of for a big three-day con with open registration.

Big Bad Con was a success. It had great players and great games. I was amazed how the Bay area gaming community came together and supported a brand new convention. Sean Nittner had really put himself out there on the belief that players and gamemasters deserved a venue where we could celebrate the gaming medium. I cannot overstate my joy that his effort and gamble paid off. This was phenomenal. I am glad I did not miss out on.

Wow that was a great con. Give my thanks to everyone on the ole' staff. It made we want to get back into gaming full swing.

Holy shit that was smooth! And awesome! Congrats, all the work you put in showed and really made Big Bad a remarkable success. I don't think anyone expected a first year con to have such a flawless execution. You really rocked. Thank you for letting me be involved, and I hope you'll give me a chance to step it up next year.

Never got a chance to say, man, but nice job with the con. Well run, and a cool crowd. Kudos. Wish I could have been there for more of it. Next year...

For the record Sean Nittner puts on a well-run con. He deserves major props.

Tweets about the con:

My call for booze made people scramble. I am among my people at @bigbadcon. It makes me happy.

Congrats to the attendees of @BigBadCon for donating 230 lbs of food! bit.ly/rx3jf5

@peregrinekiwi @entonfire I don't know the High-fives to Drama ratio seemed pretty high at @bigbadcon over the weekend.

Coming out of the post-con funk.Man, @BigBadCon was awesome.Thanks, @SeanNittner !

Cheers to @SeanNittner and crew for putting on an awesome @bigbadcon this weekend!

Had an amazing weekend at @bigbadcon! Can't wait til next year!

Because @seannittner did such a great job organizing that I did not have problems to solve. #BigBadCon

#1 con feedback? "This was the most well-organized con I've ever seen/been to." Grats on an overwhelmingly succesful con, @seannittner

Verdict: @bigbadcon has been the best con experience so far for me. Some minor issues, but most of it is right #whydidyounotattend

Hamish Cameron ran a fantastic Dungeon World game @BigBadCon tonight. Props to @SeanNittner and his crew for putting on a truly superb con!

As both a vendor and an attendee @bigbadcon has been one of my favorite events in a long time. 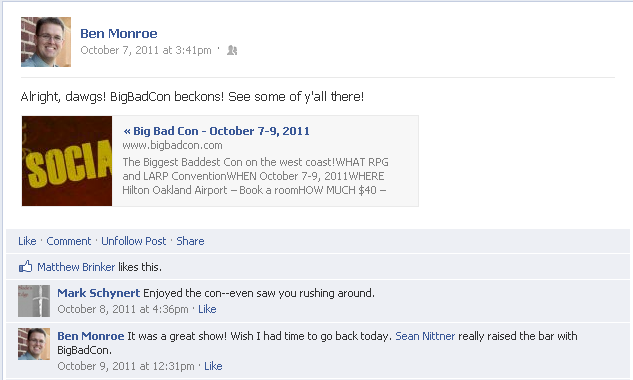 This is what a well organized convention looks like. I was unaware of any snags in the general flow of things. There were also too many games that I wanted to play in or try out - and that's not a complaint.

I heard it turned out well, so we can apparently look forward to another Big Bad Con next year. Which is awesome.

This was probably the best Convention of the year.

I had a great time.

I have been frustrated for years with the gaming enrollment system [an another con], one year not getting into a single game. Knowing I already had them scheduled was very appealing to my ocd. The website was chocked full of information. Anytime I had any questions the response was in *minutes*. I didn't have time to checkout the Open Gaming options, but a friend did and he enjoyed.

The game masters were exceptional, Michael Garcia was delightfully creepy and Matt Steele was downright scary. The other players in my game were into the rping and it really came alive. I had never gamed in a large room with panels separating each table. The panels blocked out a lot of the noise but every now and then you could hear some great comments. It was pretty obvious that they were all having a great time.

I loved the indie games. I can play D&D at home, show me more like Fiasco or Don't Rest Your Head!

You had a great con, Sean. Looking forward to next year.

I was at a convention from Friday through Sunday, and a very enjoyable convention it was too. The organiser is a guy I know, and he works hard to make things go well. This convention, his first full-blown convention as organiser, was no exception, and he did very well. Frankly, I think he got more right than people who've been doing it for years.

Among the things he got right: game sign-ups. There was a good long submission period, and then a good long period of waiting while everyone got to look at who was running what and when, which let people plan. Then, and this is the important part, the sign-ups were opened in a first-come-first-served format. The general pattern in the Bay Area is for games to be done as a shuffler, wherein you make your selections and you might get into a game or not. This leads to stress, and uncertainty, which make things less fun. Knowing what you're playing in before the con is a LOT easier to deal with. Then, there was a lot of communication, which meant lots of promotion of pickup games (and that was a popular option), and reminders of interesting events such as what passed for a seminar track this year.

Overall this was one of the best convention experiences I've had, and has made me very excited for next year's Big Bad Con 2.

I just wanted to tell you what a fantastic time I had at Big Bad Con. The con was really well organized, the quality of the players and the games were amazing, and I think that the Big Bad GM event was probably the most fun I've had gaming in a long time.

I hope you got a lot of positive feedback because I heard nothing but good things from the others that I had the chance to play with.

Thanks, Sean! I'm not sure I'll ever go to a larger convention now - between the Good Omens Mini-Cons and Big Bad Con, I've been spoiled.

Hi Sean and Devon, Thank you both again for putting on a great con. Sarah and I had a blast as did the lads. I'd like you also to pass on our thanks to all the volunteers, including Bill, Eric, Kristin, Shaun, and the other people whose names, at 11:00 on Sunday night, that I have failed to remember.

We are also hoping to be the first to volunteer for a LARP at Big Bad Con 2.

Heya, I just wanted to send some kudos once your way one final time. BBC was an absolute blast. I had more honest fun there last weekend than I have at any con in years. I’ve spoken to a number of friends who were also at the show, and they had a blast. As far as I’m concerned BBC has set the bar quite high for other bay area cons.

I was pleased to hear that Mark Schynert, games coordinator for DDC was at BBC. Hope he was taking notes!

Awesome stuff. Already looking forward to the next one!

I played in two games, Burning Wheel on Friday, and In a Wicked Age on Saturday. I'd never played either game before, though I've run IaWA quite a bit. Both games were a blast, and left me hungry to play more.

In both games I think the players were fantastic, and added a lot to the games... I was left eager to play more. As for the environment, the sound partitions did a lot more than I expected, and cut down hugely on the noise from other games.

In short, it was awesome, and I had a great time.

At BigBadCon, we get to signup for all the games we're interested and there isn't a shuffler. The great news is that I know my gaming schedule before I even show up. Compared to KublaCon where you have to hang out and try to crash into every game, this was a great relief. It was nice knowing when I had to wake up the next day vs getting up early to try to get into a game and then finding there aren't any open games and that you could have gotten a few more hours of sleep.

Great con from what I can tell. Folks seemed excited, the games were good, etc.

Really liked the hotel despite the scary elevator and 2001-style internet. The room felt huge and had really comfy bed, heat/cool that worked, etc. The multiple buildings were nice for ambiance and with nearly everything happening all in one building I wouldn't see much of an issue for folks with limited mobility. So I can definitely recommend staying there.

We Give Back
Little Red is on Fire!