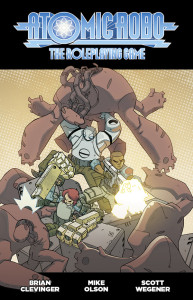 Are you ready for some two-fisted science adventure? Then it’s time for the **Atomic Robo RPG!**Have you ever wanted to face down global conspiracy as an immortal atomic robot or Carl Sagan? The Atomic Robo RPG makes it possible.

The Atomic Robo RPG brings you the most explosive Fate Core system experience yet. This isaction science like you’ve never seen it before, coming straight at you from the pages of the popular Atomic Robo comics by Brian Clevinger and Scott Wegener. Play as an action scientist or immortal robot, super-spy or pulp adventurer—or something stranger still from the hidden corners of super-science!

And Big Bad Con is the place to find it!

Atomic Robo and the Invisible Invaders of Inverness - TESLADYNE INDUSTRIES IS HIRING! All departments — Armory, Intel, Research & Development, and Transport. We need capable young Action Scientists who have what it takes to get the job done!

ARRPG: Teenage Mutant Ninja Turtles & Other Strangeness - It’s 1984 and the City is overrun by crime and corruption. Only a small group of Mutant Animals possibly born of some Strange Encounter trained in the ways of the Ninja and other Esoteric skills can clean up the City! Let’s play some Teenage Mutant Ninja Turtles & Other Strangeness using Atomic Robo The Roleplaying Game. The emphasis will be on capturing the fun of that old game with the Atomic Robo version of Fate.

Atomic Robo and The Go-Away Gun - Inspired by a “True” Story, Tesla’s team of Action Scientists race against the time to stop a last-ditch Nazi plot and protect WEIRD TECHNOLOGY from falling into the clutches of the Soviet War Machine. Another Thrilling Robo Adventure!

Atomic Robo and the Chicago Three - The world of Atomic Robo is filled with mysteries and science. It’s the Winter of 1943 in Chicago. Chicago Pile-1, the first nuclear reactor(outside of our robot hero) is about to be activated. Robo teams up with Enrico Fermi, The Sparrow, and The Nightingale to stop Nazis and who knows what else from interfering.

Curious about 5th Edition? So is The Wolf!
Big Bad Con Game Schedule Up - Verify your badge today!