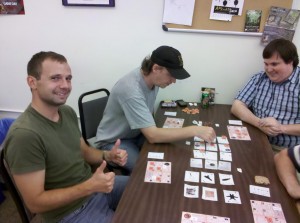 Are you a Spirit of the Century fan or just a pulp adventure enthusiast? Would you like to get a sneak peek at Evil Hat's first board game months before it hits the stores? Do you have 20 mins to spare to stop Doctor Methuselah, Shadow Mathemagician, from overpowering the poor people of the UK? Then join the co-designer of the game for the Friday teach and casual play of Race to Adventure! - The Spirit of the Century Exploration Game. It’s the best way to prep for the Saturday and Sunday tournaments, where you can win the out-of-print Spirit of the Season, featuring characters and rules compatible with both Spirit of the Century and Truth & Justice!

Since Race to Adventure! hasn't gone to print yet, you'll be playing the early prototype. So yes, there WILL be cool art on the cards ... eventually! Come race around the globe with us!

Three events will be run by co-creator Eric Lytle:

To find out more about Race to Adventure, check out their page on Facebook or visit the Evil Hat.

Bully Pulpit goes behind The Wolf's Back
The Wolf has summoned a Four-Eyed Demon!