In memory of Richard Taylor 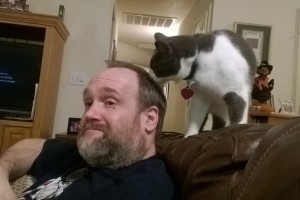 Unsurprisingly I met Rich in a convention game he was running. It was Conquest, back when it was at the Elk's Lodge. I also met Mike Bogan in that game, and, as appropriate to a Buffy game spoofing the 80s Brat Pack movies (the game was "Better off Undead") we had hilarious hi-jinks together.

Rich opened my eyes to another kind of gaming. He is the reason why a year later I applied to be a Good Omens GM, why I realized I'd rather fill my game with laughter and sorrow and discovery than with treasure and dragons. He's the reason I played Buffy and the Storyteller System, and later that I started to explore indie games.

Big Bad Con 2105 is dedicated in memory to Richard Taylor.

You were a great man Rich. You will not be forgotten.